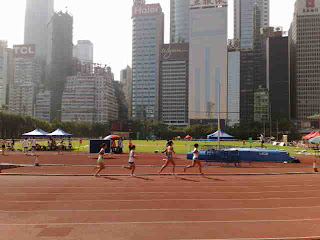 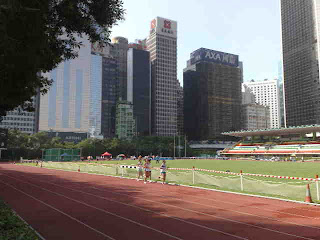 The race: it was Round #4 or 4 of the HK Track&Field Championship. Unfortunately the local Athletic Association does whatever possible to put off good distance runners from this Championship: to take part in the finals for a given discipline, you must have taken part to at least 3 meetings. The meetings are spread year round also in Summer, so not many are keen to run the 5000/10000m in June or July just to earn the presence.. so many runners take part in 1 or 2 preliminary rounds, but the finals for distance running are disputed mainly by keen track runners who just stick to taking part at every round.

The weather: to avoid getting psyched I did not check the weather before the race, but it was a 27C/80F with 75%Rh. Hot Hot, but it did not felt too bad coming from even worse.

The track: the WanChai stadium is crazily located right in the middle of the business district, with skyscrapers on 3 sides and the sea at the last side. (see the pics above...)

The starting field: decent, a bunch of 2nd tier runners like myself + nontheless than Chan K.O. This guy is, in my opinion, the most talented in Hong Kong. He holds several HK records. Unfortunately he has the disputable policy that training in Summer is not for him, so he trains very lightly for several months. In this part of the year I knew he was beatable even by myself 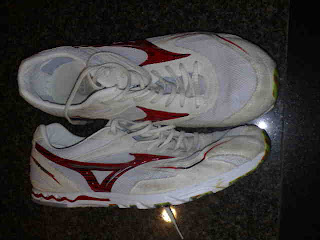 The shoes: I guess that my fellow pronator runners will feel upset, but I used a pair of ultra-light racing flat like the Mizuno Wave Ekiden.
They are maybe less than 180grams and with really minimum sole. There is anyway a minimal "wave" feature to provide some support...
I use them only for track and 5kroad races ... already a road 10k let me with strained muscles.

The race itself: we started very causiously and 1st Km was only 3'32". I did want to avoid to go slowly and let it become a 3000m sprint, so after 3 laps I took the lead and started to settle into a 1'20" lap pace that was more in line with my potential. Little by little I could not hear anymore the steps of other runners behind me and I also decided to be mentally strong, therefore:
- no more taking split at each lap
- do not turn back to see where they are...
So I started a kind of time trial alone, keeping the breathing at tolerably hard level but without overdoing. It was hot and the track was reflecting the heat even more...
I just checked the 5000m split at 17'06" and than went on at my own pace.
After 6000m it started to be tougher to keep the pace but also the lap counter was coming down to less than 10 to go...
at 8000m I gave a look back and I had at least 200m lead, so I started to believe that I could have won unless a collapse in the pace. I therefore focuesed on just keeping the same pace and keep some reserves for a fast last 800m if needed.
Also at 9000m no apparent opposition, so I cruised for the last 2 laps to close in 33'54"

Overall:
- Now I felt much more confident for the Marathon pace. Running in 33'54" in that heat means something in the low 33' in ideal conditions.
- Also very pleased about my actual effort: I was not really at 100%, becuase running alone ahead was not in the plans and I was always keeping something in reserve to avoid bonking for the heat
- Lastly, for a mid-age runner who was just running 35'30" 2 years ago, I felt this victory as a great accomplishment, becuase taking part in a Open Elite meeting (also some Olympians were there (in sprints)) and win my race is something unique for my running career. Being very much aware that 33'xx is ridiculous for Elite sport..
- About the heat from the track: I got a big blister under my toes because of the friction between the thin shoe and the boiling surface of the track !!!!

Email ThisBlogThis!Share to TwitterShare to FacebookShare to Pinterest
Labels: Race

Good race report. I think you are now officially one of the HK-based elite runners.

You are definitely on track for a fast marathon.

In the kingdom of the blind the one-eyed man is king...

You may now be a big fish in a small pond but, a win is a win and am very impressed with your improvement under such difficult conditions,
WELL DONE!

Well, congratulations. Maybe wins are like London buses, they always come in pairs (or triples ...).

You're on a roll.

Very well done, 33'54" without giving everything, your way to a marathon at 3'40" looks wide and clear