A Kenian among us

I signed up for another summer 10k race yesterday and I was a bit puzzled to see collecting his bib also the lean frame of a Kenian runner...
a "real" Kenian in a race in HK is incredible... actually he was a Kenian living and running in Malaysia who was on some short holiday in Hong Kong.
Together with him, the race line-up also included 2 invited runners from Taiwan. 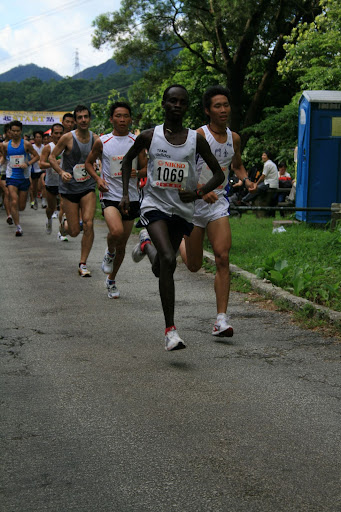 But in reality, I did not make the counts with the lingering fatigue from the heavy workload training for the marathon. I started well, making a good pace that lined up very quickly all the local competitors (the overseas runner were soon gone, disappeared ahead with a different speed).
It was particularly pleasant that the only one who kept pace was my occasional running partner E. (see many older posts). Sharing those heavy workouts was really beneficial for me and did really brought him a great improvement.
We made the 5k in 17'20" and I was feeling relatevely fresh, ready to push a bit more...
but..
...but simply I felt out of gas, not really ready to make any increase of speed. At 5k mark, we were even able to catch one of thew taiwanese invited runner, but he easily resisted at my attack and shook me off again.
So I just cruised to the line in 34'57", just ahead of a slight margin to E.

Good: 1st Master and 1st "local" runner. It was pleasant to see that many components of the HK National Team were left behind. 2 Vouchers for Mizuno shoes are not to neglect anyway...
Bad: hei, I really expected to go faster. No actual improvement in time versus last month's race on the same course. Maybe was a bit hotter and sun was shining, but at 7k I switched off the engines, not really a good sign. I need to understand if the fatigue is due to normal training adaptation or I am overdoing (considering the heat and difficult recovery). 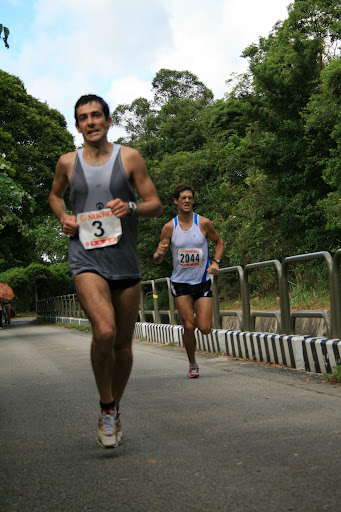