a long absence...and a come-back (or actually 2)

I must beforehand apologize with those 2-3 people who sometimes read my blog: I have not been posting for very long, mainly because really busy with the work, but also because I really had a totally uneventful summer... no races, no particular running experiences to share.

well, then maybe because of that (un-eventfulness...) I just piled in run after run, trying to survive the scorching summer heat, without making too many plan.
I gave up the idea of running the Berlin Marathon (despite having already paid 100EUR of registration) because it did not match well with our family plans and now I am just putting ALL my cards in the Fukuoka Marathon on December 2nd.
I do not have much more to ask to running, apart from eventually lining up for a marathon injury free and well prepared to tackle a PB. And this year, I know I am close to my last shots.

Now that the rant is over, I can just summarize that:
- somehow I had a good consistency during the summer, with many weeks over 100k and some decent workout
- I focus a lot on stretching and strengthening to reduce the risk of injury and it seems working until now.
- My right hamstring seems now almost ok, but I know I have to work more on glutes activation, strength, etc, etc

I also committed to cut down on sweets, soda, etc to trim down a couple of Kg in time for race day...I was definitely 2kg over my normal weight in July, but now I am back to normal, and still some work to do.

So last Sunday I somehow hit an intermediate target into this path. 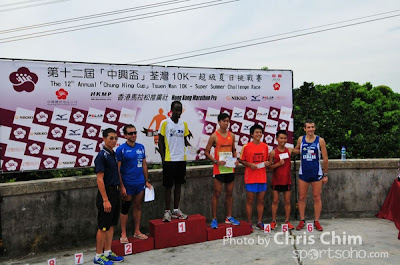 At the Chung Hing 10K Cup I felt the same positive vibes as in the summer of 4 years ago... and it was like being back to my best period....


The photo is the award ceremony for the Top 6 runners and I am the one on the right.
With huge satisfaction, I finished 6th overall in this very loaded race, just behind all the very best runners in town.
People familiar with the HK running scene will easily recognize the faces of the other guys, but is enough to say that the Top 4 are/were all HK record holders over different distances and then is me...
To top my personal satisfaction, my friend Stefano also come-back from injury with a boom, taking the 2nd place.
It has been 4 years since we went to a podium together and it has been a troubled 4 years for the both of us, but now we are back...

Some more about the race: the course is out-and-back flat along a catch water and being August in HK, the temperature at the start was a 29C with 70%Rh...
At the start, I realized that ALL (and really ALL) the best runners in town were at the start line and I was even wondering how I could have deserved an Elite bib for such a race...
Said that, we started relatively slow and somehow we reached the 5k turnaround in 17'40" in large pack of 11-12 runners. I was feeling good and my stride was quite effective, but under that heat, the last 5K were going to be "long"...
T.K. and Stefano were already clear ahead, but for our pack after the turn-around point, the fireworks lit up and the pace increased suddenly. I knew that I had absolutely to hang out tough with the remain of the pack as long as I could to make a gap with the runners left behind and then try to keep a decent pace once I would have been dropped myself (once you are in a group where the other runners have a 5K PB of 14'xx" you know that you are going to be dropped sooner or later...).
As for the script, at 8k I was really done to follow them and went at my pace, which was anyway enough to close in 6th in 35'01" (with a 5k-10k split of 17'20")...
In comparison, 4 years ago, I was entering into my best running season (which ended unfortunately very soon anyway) and I run in 34'57" at the same race (temperature was similar)... so very encouraging.

Now keep going and I will try to update more frequently, also with more general news about running in the area

Great to see you back in great shape, long may it continue.
a negative split is always impressive and in the heat even more so :0]